When people think of their teeth, three words often come to mind: cavities, white, and straight. This is not surprising, since the public is bombarded with product advertisements promising results in these areas and pictures of celebrities with beautiful, stain-free, and perfectly even teeth.

There is a bigger problem to worry about, one that is the cause of tooth and mouth issues: plaque. This nasty substance loves to grow on and between teeth. It can wreak havoc on both those pearly whites and the gums that support them. There are a variety of anti-plaque weapons in the home dental arsenal: the trusty toothbrush, traditional string floss, and more sophisticated air and water flossers.

In this article we will answer the question, 'Does a water flosser remove plaque?'

Plaque and Tartar: What’s the Difference? Dental plaque is a tacky, colorless coating that develops on and between teeth outside and under the gums. The substance consists of a varied assortment of microorganisms. The members of this population have the ability to interact and cooperate with each other, enabling them to resist antibacterial preparations. While it is found everywhere in the mouth, plaque’s favorite spots are between teeth and the nooks and crannies of molars. Tartar, also known as calculus, starts out as plaque. If it remains on your teeth, it solidifies into a coarse, porous substance.

Unlike plaque, tartar cannot be removed at home; only a dental professional can rid your teeth of it.

This is why it is important to remove plaque from teeth before it turns into tartar.

Plaque and Tartar: Cause and Effect

If food (especially carbohydrates) remains on the teeth, it joins with the mouth’s normal bacteria to form an acid. When this acid, other bits of food, and saliva combine, plaque is the unpleasant result. If the stuff is allowed to build up, it can give teeth a fuzzy, slick feel.

Without proper oral hygiene, the acids and micro organisms in plaque launch an attack on tooth enamel, resulting in cavities. It can also stick to fillings, braces, and other dental work. And if plaque forms along the gum line, it may cause bleeding and gum disease. Even worse, acid in plaque that grows beneath the gum line has the potential to damage the bones that support teeth. (NIDCR) The presence of tartar complicates things even more. Brushing and flossing can be more difficult—increasing the likelihood of cavities. If tartar develops under the gum line, there may be more bad news. The harm to this tissue is a possible cause of worsening gum disease.

If the damage continues, spaces can develop between teeth and gums; bacteria may move in and cause infection. When the body’s immune system launches an attack, the chemicals it releases combine with bacteria and its secretions. This cocktail can cause harm to bones and tissues that support teeth. What’s more, there is a connection between this bacteria and heart disease.

Water Flossers: What the Dentist Ordered?

Good oral hygiene is essential for keeping plaque at bay. Brushing teeth and using dental floss form the first line of defense against the bacteria-laden film.

However, there is another popular method people use to get at plaque hiding out between teeth. For fifty years, oral irrigators have been closely scrutinized for their success in rooting out plaque.

In studies weighing the benefits of string floss and oral irrigators, the latter have demonstrated notably more effectiveness in reducing bleeding and gingivitis (minor gum disease). During one study, researchers discovered that brushing teeth and using a water flosser cut down on plaque as well as brushing and using string floss—and achieved much better results against gingivitis and bleeding gums. In another clinical study involving seventy adults, participants used either a manual toothbrush and waxed string floss or the toothbrush along with a water flosser. The water flosser showed an overall benefit of 29% and an even greater ability in getting rid of plaque in specific areas of the mouth (an impressive 39% improvement on surfaces facing the tongue).

A study comparing the benefits of water and air flossing also yielded dramatic results. Participants used either an oral irrigator or an air flossing device along with a manual toothbrush. While members of each group had the same levels of plaque in various parts of the mouth at the beginning of the study, water and air flossers both demonstrated marked improvements in plaque levels. The water flosser users had greater reductions in different places, including the entire mouth (74.9% to 57.5%), side-by-side teeth (92.1% to 77.4%), and surfaces facing the tongue (65.7% to 45.4%).

Can a Waterpik remove tartar? Unfortunately for those who would like to skip regular dental visits, the hard stuff cannot be gotten rid of so easily. A trip to the dentist is necessary for procedures like scaling that eliminates tartar, plaque, and stains. Even more importantly, an examination with x-rays can pinpoint issues with teeth, gums, and bone before they get to be serious problems.

But that should not deter you from using a water flosser. Even if it cannot rid your mouth of tartar, it can prevent plaque from developing into tartar in the first place.

Since their arrival on the dental scene half a century ago, water flossers have earned a place alongside that trusty toothbrush in the battle against tooth decay and gum disease. A few minutes a day can help keep your pearly whites plaque-free. And that’s good news not only for your teeth but the gums and bones that support them—and your overall health. So, does a water flosser remove plaque? Yes it does, and there are studies to prove it.

If you are looking for more information on water flossers, check out these Waterpik reviews. 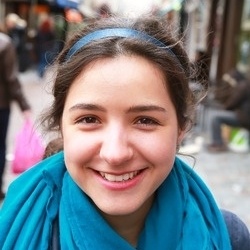 Aurora is the lead editor here at pearlywhytes.com. She is one of those people who actually likes going to the dentist. She loves to write about anything health related, but oral health is her most passionate topic. Her free time is spent partaking in family activities and experimenting in the kitchen.

Why Does My Breath Smell Like Poop When I Floss?

A Look at the Best Dental Floss on the Market: Our Top 5 Picks